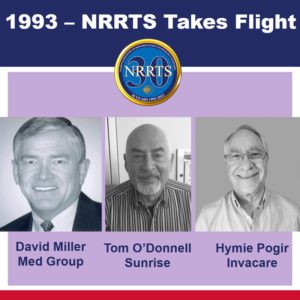 Of particular note is that the early application did NOT require an education component but did require 3 letters of recommendation. This requirement is revised in a few years.

NRRTS is now poised and ready to provide standards of practice and ethics so desperately needed for the supply of Complex Rehab Technology.

The Wild West has a new Sheriff in town… and the name is NRRTS.

As of this writing, nine (9) of the original Registrants who were accepted in 1993 are still active:

Congratulations and Thank You to these NRRTS Pioneers 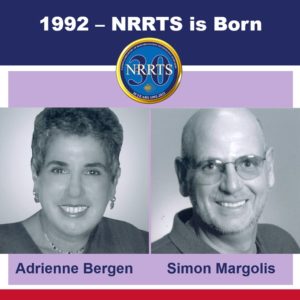 Following the conception and founding of the National Registry of Rehabilitation Technology Suppliers (NRRTS) in 1992 by visionaries Adrienne Bergen and Simon Margolis, the NRRTS organization incorporated and readied itself to begin registering qualified Complex Rehab Technology Suppliers.

For the next 30 years, NRRTS sets the standard for what it means to supply CRT to the people that need it, requiring rigorous education and vetting.

There were no standards, no certifications, no supplier qualifications, fewer equipment options, and less demanding documentation.

Anyone could provide wheelchairs and seating. There was no way to determine if the supplier was qualified or knew anything at all about CRT. There was no complaint process and no Code of Ethics.

NRRTS has evolved through the years with a in-depth application process. No longer called, “members”, NRRTS Registrants must meet rigorous standards, and after a review process and approval, obtain the designation, RRTS® and CRTS®. Relying on a NRRTS Registrant for the provision of CRT is an assurance of quality, dedication, and caring

For the next 30 weeks, we will post pictures and stories of people and events that were instrumental in and dedicated to making certain that the provision of CRT was done correctly and ethically, with the patient foremost.

Come back and follow the progression of the NRRTS organization over its 30 year history leading to our anniversary celebration.